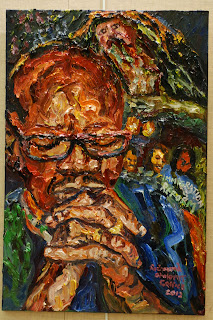 As the news unfold of the Boston Trajedy and more information were revealed about the Bombers plot in destroying such a memorable event,  we were all tortured emotionally by mourning the death of loved ones both close to us or also symbiotically and passionately connected in grief. It's painful to see many innocent people get hurt through reckless act of violence. As we watch the news, new questions are asked that is not necessarily new, but questions perhaps asked during 9/11. For instance,  "Why would people seek to kill with sadistic pleasure?" We will all examine this situation from different perspectives, but as an immigrant, I am also concerned about the ripple effect it would have on the discourse of immigration, especially since good people from other countries, with good intentions who want to assimilate themselves into the american society would face serious backlash. It is almost evident that "One Bad Apple Spoil The Bunch" which I hope those who are against immigration for whatever reasons will not capitalize on this trajic, ungrateful and irresponsible actions of these two individuals who bit the hands that fed them, to smear all immigrants. Let me also add that while it seems as if those boys their dad, as an attorney filed for them and got political assylum, then a green card, not all immigrants are that lucky. Infact, the good ones, with love and good intentions for this country are faced with difficulties irrespective of their achievements in this country at times, when dealing with immigration. The painting "Immigration Reform" tend to look at the subject meditating on the issue of immigration, while in a prayer position.

Over the years, since 9/11 or before even that trajic event, I have indulged myself mentally and in my creative process to question human actions, not their reasons to kill,  but their mission to kill with sadistic pleasure. As a native of Sierra leone who was lucky to escape the brutal civil war that lasted for ten years. The war consumed innocent lives including my brother, and left many people maimed, scared with violence after losing loved ones. It destroyed childrens' lives by converting them to monsters and indoctrinated them into a machine of rapists and killers, as they now try to rehabilitate themselves; all of us in different disciplines are facing a different paradyme in our thought process. What can be done to stop this madness? One salient point of agreement is that Yes! The world around us is changing and even though we dont not want to be grappled with fear, still fear is infiltrating into our lives..

Artists in the past have been influenced by what was happening in their society. Obviously, it's hard for an artist to divorce his creativity from his background. As we face this era of the unknown and the unpredictable, and we get emotionally charged in this new era of violence, to what extent is it going to affect everyone especially us artists, dancers, sculptors, musicians or any field that requires the soul, mind and the body to be in the right restful place to create their art? Time will tell!
Posted by Richmond Garrick at 12:24 PM